TasteBud A and I went with the boys on Friday night on an expedition to find the perfect BYOB destination for our Cinco De Mayo wine exchange.

BYOB Mexican restaurants aren’t exactly plentiful in Pittsburgh.  Through word of mouth, I found Mexico City Tacos and Burritos.  But we went to test out the venue several weeks ago and left with a bad taste in our mouth – both service and food.  With Cinco de Mayo fast approaching, we needed to come up with an alternate location for our group of 25 to gather.  All I can say is “Urbanspoon Rocks!”  There, we found Fajita Grill on Ellsworth Ave. 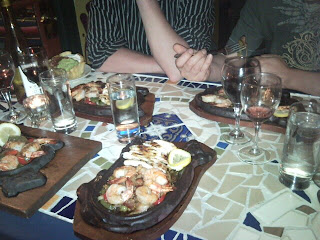 After downing 5 baskets of chips and salsa, all four of us sampled the combination platters.  Jorgé should have thought of putting bacon and shrimp in traditional Mexican food long ago!  Between the four of us, we had each of the three options.  I had the Pollo (chicken).  TasteBud A had the Beef.  And our comrade David had the Scallops.  Each platter is a base of meat with both shrimp and bacon!  The bacon added a nice smoky, meaty flavor. I thought this was a unique flavor addition to traditional Mexican combination platters.  The shrimp, if it were already de-tailed would have been perfect to pop in your mouth or roll into the tortilla.

The default salsa served with the chips and the meal was very good – rivals a personal favorite salsa found at El Campesino!  I say default salsa, because there is a range of heat levels each diner can choose from.  I also sampled the Colorado salsa.  It was a pastier salsa that you spread on your tortilla like butter.  It ranked 2nd from the hottest on the salsa scale, but I found it to be more flavorful than hot.  For those of you who have been reading, I do like spicy/hot flavors.  But FLAVOR is the key.  I don’t just want to burn my tastebuds, I want to be able to taste the rest of my dish and use the heat to compliment the food.  The Colorado salsa did just that.

TastedBud A enjoyed his combo platter – except for the featured meat – the beef.  He found it tough to chew.    The meat wasn’t consistently cooked through either.  Some slices were cooked medium well – some medium rare, and the pieces that were fatty just didn’t make eating them in a tortilla shell very easy.

Whereas the pollo and beef platters came with a decent amount of meat in them – enough for 2-3 tortillas, the Scallops platter came with just 4 scallops which were smaller than the shrimp.  Although they tasted well, David didn’t find them as filling.

So even though the combo platters resulted in mixed reviews, the highlights of the meal outweighed the downfalls and we succeeded in finding our Cinco de Mayo wine exchange location.
For me, the highlights were:

I hope to report another positive experience after the wine exchange 🙂  I’ll post more about our wine exchanges later.

Vincent’s of Greentree in Greentree

Save The Date: A Taste Of Oakland